Bethlehem Lutheran Church is a longstanding Lutheran church located in West Dundee, Illinois.  Our congregation dates back more than 110  years.

THE STORY OF BETHLEHEM

This is the story of people who founded the church, grew and tended it, financed it, donated many gifts to the buildings and did much of the work on it through the next hundred years and beyond. This brief history would be much longer if the names of people who donated gifts, and funded and worked on renovations were to be included. On occasion they did things they were not prepared to accomplish – all in the faith that God would bless their endeavors.

In 1909, a group gathered to form a Lutheran Church in West Dundee. They were led by John F. Fierke, owner of the Illinois Iron and Bolt Company. The church was organized as the Evangelical Lutheran Bethlehem Kirche December 5, 1909. The congregation was formally incorporated in Kane County on May 1, 1910. They began with 42 voting members (men) and 178 souls (women and children).

A wooden, one-story building located at 111 North Fourth Street was chosen for the church. It had been built in 1844 by the Congregationalists, then used by the Scotch Presbyterians, Zion German Methodists and finally Bethlehem Lutheran. The congregation paid $1,100 for the property. 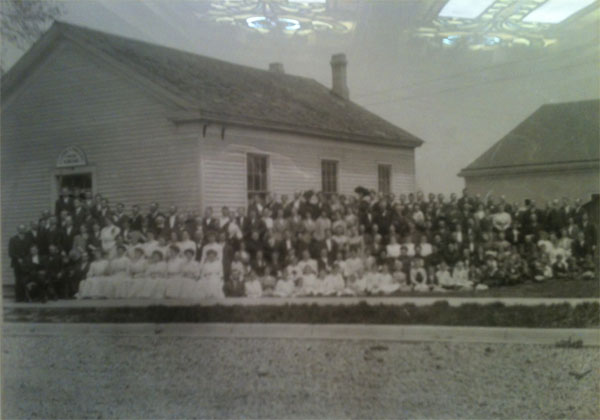 It was eventually decided to acquire a lot at Fourth and Main as the ideal place to build a permanent church. Bethlehem bought the lot and the home on it for $4,300. The home was moved to the back of the property and turned to face Fourth Street and served as the parsonage until a new one was built in 1953. The new church building was completed January 28, 1912. The donated bell, hammer and clamps together weighed 5950 pounds and cost $2,000. The bell was tuned to harmonize with the other bells in town. A donated state-of-the-art Estey organ was also installed. 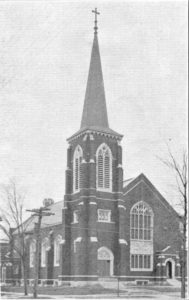 Typical Sunday total offerings from the entire congregation around this time ranged from $7.76 to something over $20.

Originally Bethlehem was a German-speaking church. Sermons and classes were presented in German, and its books and and records were kept in German.

People had to register before communion, forming a line at the pastor’s office to announce their intentions. Men and women went to communion separately. Registration began to fade and men and women began to be communed together in Mixed Communion. 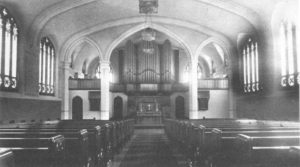 As German became less understood some worship services and classes eventually began to be held in English as well as German, and eventually in English only. In 1933 books and records were switched to English.

Bethlehem also had a day school early on, held in the one-story wooden building used as the first church. The man who started the furnace at the school every morning was paid $2 a month. In 1928, the congregation voted it was unwilling to bear the cost to make needed repairs to the building. It was agreed that Bethlehem would send its students to Immanuel Lutheran. By 1980 forty-five to fifty Bethlehem students were enrolled in Immanuel Day School with a friendly tuition cost. During school days Immanuel used our choir room to teach about 70 nursery school children.

In 1937, the Ladies’ Aid Society, with a membership of about thirty women, was active in all aspects of the life of the church. The ladies were divided into many committees and they were very good stewards of their finances. They put on lunches and dinners and parties. They loaned money to to the congregation with frequency, and they did things like pay the gas bill, keep the kitchen in good working order, buy new dishes, and so forth. They sent cards and visited ill members, sent cards and flowers for special anniversaries and supported the orphan home in Addison with items of food and clothing.

In the early 1950s a new parsonage was built on the site of the original church.

In the late 1950s, the church interior was completely modernized and redecorated in anticipation of Bethlehem’s Golden Anniversary.  Many families donated items for the renovation. The Rededication Service was held February 2, 1958. The congregation was able to approach the fiftieth anniversary with a beautiful building with everything in good working order for the next fifty years. 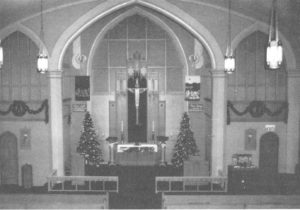 In 1962, a gift was received that led to Bethlehem becoming known as the “Church of the Lighted Cross”.

Sunday School classes were taught in the Fellowship Hall with chalkboards used as dividers, in the upper balconies, any place where there was room. There began talk about building an education addition. Eventually the land south of the church was purchased, the old parsonage was moved to Lincoln Avenue and groundbreaking for an education building that would harmonize with the church took place June 21, 1964. It was ready for the dedication on May 2, 1965. A beautiful aspect of the the new building was a donated mural at the Fourth Street entrance created by artist Reinhold Marxhausen. The two main ideas in the panel are grainfields, which the word Bethlehem means, and trees, which appear in the Garden of Eden and when Christ gave his life on a tree. For those who want to know more, a description of the meaning appears on a plaque next to the mural. 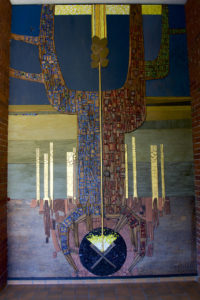 The first additional staff in the history of the church was added – Director of Christian Outreach. On the 60th Anniversary there were more than 500 members worshipping at Bethlehem.

The church was redecorated again in preparation for the 75th Anniversary in 1984. 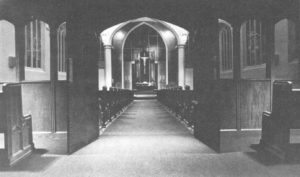 An Outreach program was developed with two churches in Chicago, with our big yellow bus Sir Bethlehem picking up their members and ours to go to shared destinations. A contemporary service was begun and a Christian contemporary rock band started – the Daystar Band.

In 1995 Bethlehem installed air conditioning to the delight of everyone.

Another renovation was begun in June 2001, this one for the 90th Anniversary. This gave us the church we have today. The church was made handicap accessible with the addition of an elevator. A new entryway and connecting stairways gave the church and education building a seamless feel.

On February 15, 2003 the Congregational Church offered Bethlehem first rights to purchase their property adjacent to ours, which Bethlehem accepted. The property included their church, parking lot and parsonage. This gave Bethlehem much needed parking space and the ability to lease space for a Lutheran Home adult day care center that would be called Cherished Place.

The 100th Anniversary was celebrated with a special event each month during the anniversary year of 2009. Former pastors, interim pastors, those from our congregation that had gone on to become pastors, important Synod representatives, oldest and youngest congregation members, etc. were invited to the proceedings.

The Congregational parsonage hosted the Children’s House Montessori School for  a period of time. It is currently being leased to “My Secret Garden” which hosts children’s tea parties and dress-up times.

In 2017 a beautiful new sign was created in front of the red brick church – the sign you see at the top of this page.

A new church mission was adopted:  To share the Living Water of Jesus Christ with all who thirst. A supportive logo was designed to reinforce the mission.

The Contemporary Worship service is now called The “Well” to relate to the new church mission.

The Messengers Praise Band and Singers perform Contemporary Christian Music. Audio visual technology shows the words to songs so the congregation can sing along,  enhances sermons with visuals and videos, and presents informational messages and upcoming events.

For a couple of years Bethlehem provided a pop-up bible school at Graffelman Park during West Dundee’s annual Heritage Fest celebration. Live playlets were performed about the birth of Christ and craft projects were provided for children. 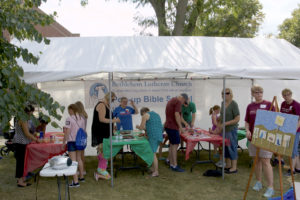 At another community outreach program, just before the school year began, Bethlehem opened its doors to students from the community whose families may have found it difficult to afford supplies for the upcoming school year. Students who came received backpacks and school supplies at no cost and enjoyed ice cream and projects. 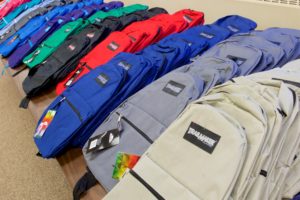